There is a tradition on Semester At Sea to celebrate the first time crossing the equator. It’s called Neptune Day, and represents leaving behing the Pollywog status and becoming an Emerald Shellback. It is meant to give praise to Kind Neptune to help us through the rest of our voyage.

07:00 we were woken up by crew members playing drums, bells and whistles marching up and down the hallways.

08:00 everyone had to report to the pool deck, swimsuits on and sunscreened up.

We had to plea to King Neptune to allow us to cross the equator, and become Emerald Shellbacks (meaning we have crossed the equator once). As we stood there in the rain dancing and singing, the first group of Pollywogs started the rituals: 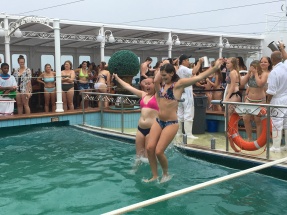 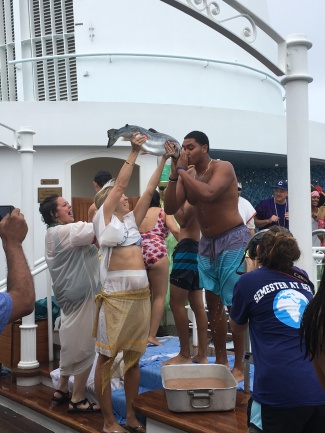 I have never started a party at 8:00 in the morning before but it was such a fun way to celebrate. When it came time to actually cross into the Southern Hemisphere there was a buoy marking where the equator is, other than nothing but water as far as the eye could see, I have to say that the two hemispheres looked pretty similar. Physically crossing over the equator isn’t something that many people get to do by ship, and I am honored to now be a Emerald Shellback.

Thanks for following along,