“Certainly, travel is more than the seeing of sights; it is a change that goes on, deep and permanent, in the ideas of living.”

After 6 days out at sea, we made it to Cape Town. I have dreamt of travelling to South Africa for 5 years; I could barely hold in my excitement as we pulled into port. We arrived a few hours later than expected, but it was nice to enjoy all the sights as we came closer to the land. One of the professors had a “wildlife watch” on the bow of the ship where we observed many birds, seals, fish, and whales. Cape Town is an immense, vibrant city with so much to offer.

As I am sure many of you have heard, Cape Town was in the news around the world with the worry that it would be the first city to run out of water. I was concerned about travelling through the city but soon realized after arriving that there was no need to worry.

Last year around this time, the city of Cape Town’s water reserve was running at an all time low, and the government had to restrict each individual to 50L of water a day. Although this was a mandatory limit, there were still people who were not cutting back on their water use, and the city was concerned about how low the dam level was. They wanted to scare the locals into cutting back on water usage by stating that there was a chance the dam could run to low to leave the taps on at a level of 13.5%; they called this Day-Zero. As soon as national news reporters caught wind of Day-Zero, it was blown out of proportion. There was no real threat that the reserve would run dry, but if individuals were not limiting their water use, they were going to shut off all the water taps and set up water stations around the city, where people would have to go to fill up a pale of water each day, as a means of monitoring the water use.

This was the first time in history that the reserve was this low. Due to the fact that the recent years have been warmer than in the past, their rainy season was very dry last year, and there has been an increase in the population.

Also as a result of the news getting reported around the world, many tourists cancelled their holidays leaving many tour guides and companies with a slower season than years passed.

Now the water levels are more than double what they were last year around this time at about 76%. The city is no longer worried about running out of water, however, it has made the people much more conscious about their water consumption. There are signs graffitied all over the city, on posters and in bathrooms, asking everyone to be aware of how much water they are using and to only use as much as is needed.

The first full day in Cape Town, a couple friends and I booked a wine tour to take us through the wineries around Stellenbosch. We went to 4 different wineries, sampling 23 different wines including some CBC’s, Brandy, and a blend unique to South Africa called a Piontage. It was a perfect way to start our time in the country getting a little tour of the city and surrounding landscape. The landscape around the wineries reminded me of the Okanagan area in British Columbia, very mountainous filled with rows and rows of fruit orchards. 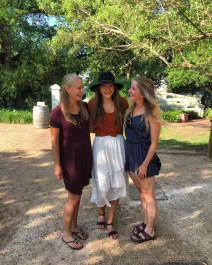 How can you go to Africa and not go on a safari? I signed up through Semester at Sea to participate in a 3 day, 2 night trip to the Botlierskop Private Game Reserve. We all hopped on a bus and enjoyed a 5 hour drive through the country. The landscape looked quite similar to Southern Alberta with the fields of crops and mountains. The only difference was that instead of cows roaming the fields, there were Ostrich. 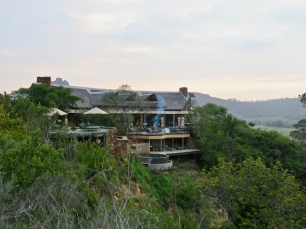 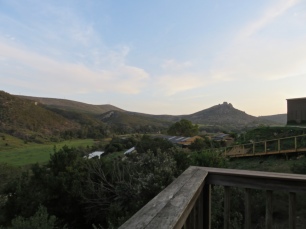 When we got to the reserve, we were welcomed into a beautiful lodge and fed a fabulous 5 course lunch. The ship food has been pretty good, but it was nice to mix things up. After lunch, we were shown to our rooms. Our room was a luxurious tent with a big bed (heated blankets included), a big soaker tub, and an outdoor shower. Our patio overlooked the valley where we could see some Springbok (South Africa’s national animal) and Wildebeest grazing. It was so peaceful and relaxing, which was a nice break from studying. The Reserve was named after a mountain on the property that has a large rock on the top. During European Colonialization and trade, someone would be posted on top of the hill to keep a look out for incoming ships. If a ship was coming into port they would create a smoke signal so the people in the town below could prepare supplies to stock the ships.

The Reserve also rescues all of its animals, the lions were all rescued from a Big-Game Hunting Park that breads animals to then be hunted by tourists. The elephants were rescued from a circus. There is 1 rhino killed every 8 hours around Africa from poaching. It is important that more reserves like this open around Africa because there are many animal species that are endangered due to poaching and hunting. The animals on the Botlierskop Reserve have free roam of the  4200 ha property, hunting their own food and living as they would in the wild.

Over the next 2 and a half days, we went on 4 game drives around the property, separated into 2 trunks. Our guide was Neil, a South African man who studied biology at the University. He has worked at the Reserve for 13 years and it is easy to see how passionate he is about his work. Any question you had for him about an animal, he had the answer.

It was a lot colder than expected, and I thought I was over packing when I brought my toque but am I ever glad that I had it. On the morning drive it was only 6 degrees Celsius and very foggy, but the cooler weather meant that the animals weren’t hiding in the shade. Not the weather I was expecting in Africa.

Over the few days, I saw all sorts of animals including springbok, impalas, wildebeest, blue cranes, rhinos, giraffes, lions, elephants, and hippos. I could hardly believe that I was in Africa on a Safari but enjoyed every minute. Since we had 3 days of game drives, we were in no rush and took advantage of enjoying each moment watching the animals in their natural habitat. I don’t think I could choose a favourite animal because they were all so amazing! The elephants are such gentle giants; rhinos are very peaceful; giraffes are beautiful and amazing creatures; and the lions were so lazy. On the last morning, a lot of us took part in a horse back safari (the lions were in a different area, don’t worry Baba). It was cool to be one with the animals going through the fields. 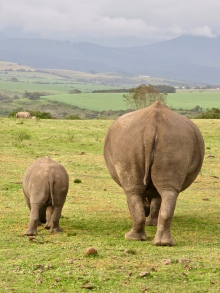 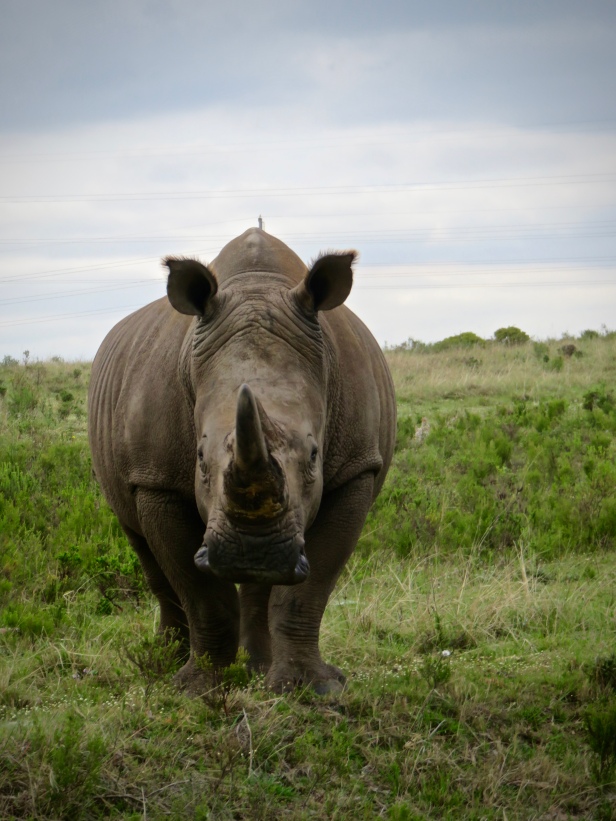 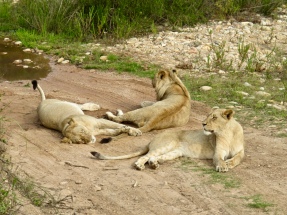 In our free time, I got to enjoy some pool time and a canoe ride down the river, as well as some relaxation by the fire. It was a fantastic few days with great company and fabulous guides. For any future Semester at Sea students, I would highly recommend signing up for this field program.

On our last morning in Cape Town, a friend and I set out to hike up table mountain, and the plan was to take the cable car down. We left the ship at 06:00 and almost got blown off the gangway it was so windy. We decided to at least go to the bottom of the mountain and then decide if we wanted to hike up, so we ordered an Uber and off we went. The driver told us that the winds would die down by 09:00, spoiler alert, they did not. As we hiked up the mountain, the winds got stronger and stronger because the gorge we were hiking up funneled the winds directly to us. Closer to the top, we were practically on all-fours climbing up hoping that the winds wouldn’t be so strong at the top. It took us about an hour and twenty minutes to climb up, but it was even windier at the top. I jumped up and got blown 3 feet back it was so strong. Unfortunately, we couldn’t really even enjoy the view because of how cold it was, even wearing 4 layers, a wind breaker, mittens and a toque. We took a couple quick pictures, did a little exploring and then made our way back down because the cable car was closed due to the strong winds. 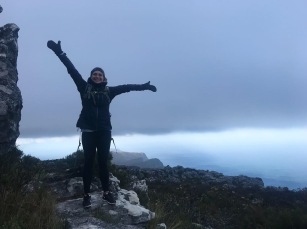 South Africa was even better than I had anticipated, and I cannot wait to go back again. I immediately felt at home there and hope that it isn’t long until I can return.

Thanks for following along,

4 thoughts on “6 Days in South Africa”